The East Coast Rail Link (ECRL) is a 640 km long railway under construction in Peninsula Malaysia. This standard gauge double-track railway will connect Port Klang on the Straits of Malacca to Kota Bharu at the northern end of the east coast. The railway will pass south of Kuala Lumpur at Putrajaya Sentral, where it will interchange for services to KL and Kuala Lumpur International Airport. 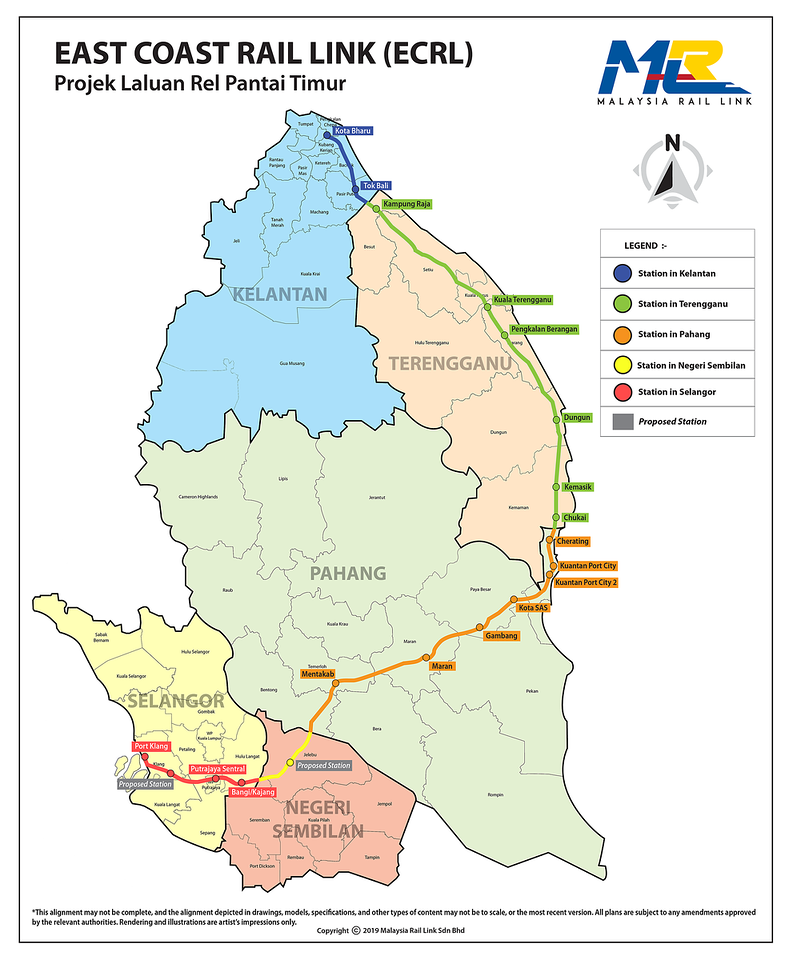 There is currently no coastal railway on the east coast of the peninsula, so this will connect the state capitals of the east coast with each other, and provide a faster land route to KL.

This line is not to be confused with the current KTM East Coast railway line (better known as the Jungle Railway), which doesn’t reach the coast until the last stop.

The railway will be used for passenger and freight services. Passengers trains will operate at 160 km/h and freight trains at 80 km/h.

The ECRL was approved in 2016 and construction began in 2017. In 2018 a new government was elected in Malaysia and the project was cancelled due to the high cost and other irregularities. In July 2019 the project was restarted after a realignment of the railway along with a renegotiation of the cost. In September 2020 the line was being considered for realignment again back to the original alignment. At this point the railway is expected to by completed by 2026.

RM10 billion worth of ERCL works to be awarded to local contractors, suppliers – [06/01/21]
“Malaysia Rail Link Sdn Bhd (MRLSB) and China Communications Construction Company Ltd (CCCC) have agreed for the latter to appoint local sub-contractors and suppliers for at least 40 per cent of the civil works of the East Coast Rail Link (ECRL) project worth nearly RM10 billion.”

Transport Ministry: ECRL project ahead of schedule, to proceed with existing allocations – [18/11/20]
“Construction on the East Coast Rail Link (ECRL) mega project will continue next year as the federal government already allocated funds for it, the Transport Ministry confirmed today.”

Selangor asks federal govt to reconsider ECRL route – [18/09/20]
“Selangor is asking the federal government to reconsider its decision to abandon changes that were made in 2019 to the proposed route of the East Coast Rail Link (ECRL) mega project.”

ECRL work going on from Dungun to Mentakab, MPs told – [27/07/20]
“Construction work for the East Coast Rail Link project is continuing, with work focused on specific construction at the Section B Line from Dungun, Terengganu, to Mentakab in Pahang.”

Tony Pua calls on China to investigate 1MDB corruption links – [21/07/20]
“As a background, by May 2017, the then Prime Minister Dato’ Seri Najib Razak had signed the Phase I and Phase II of the East Coast Rail Link (ECRL) project with a total value of RM55 billion with China Communications and Construction Company (CCCC). By June 2017, Malaysia had paid CCCC RM1,931.4 million and another CNY17,320 million via a loan from China Exim Bank.”

Transparency, ‘white elephant’ concerns in ECRL realignment – [07/07/20]
“The East Coast Rail Link (ECRL) is back in discussion as the current Perikatan Nasional (PN) government wants to realign the project to the one first proposed under the Barisan Nasional (BN) regime.”

Malaysia gives green light for construction to resume on East Coast Rail Link – [28/04/20]
“The RM44 billion (S$14.3 billion) project was suspended when movement restrictions were put in place on March 18 in Malaysia to curb the spread of the coronavirus.” 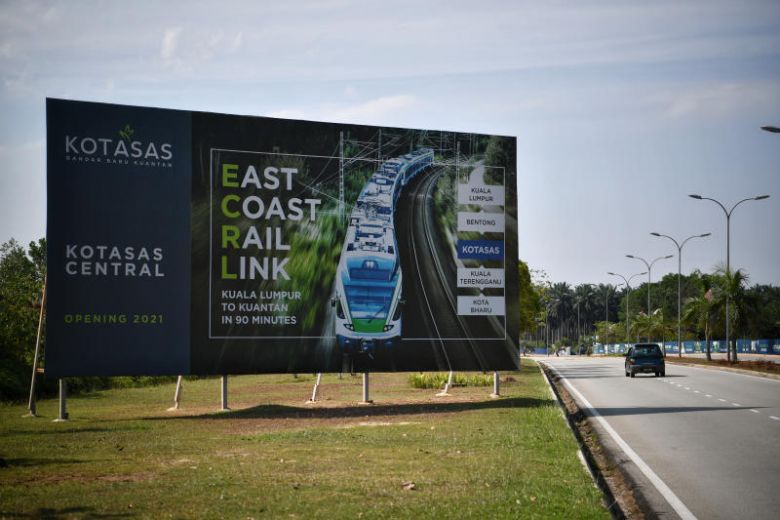 ECRL realigned to make Putrajaya transport hub, say sources – [22/04/20]
“The realignment of the East Coast Rail Link (ECRL) fits into a plan to turn Putrajaya into a transport hub…The ECRL will also be connected to a KLIA express station and an MRT2 link, and there is talk of adding the monorail to the network, said the sources.”

Transport Ministry: ECRL is 15pct complete – [13/02/20]
“The shortened East Coast Rail Link (ECRL), which was relaunched last year, has reached a progress rate of 15 per cent.”

Photo journey: Malaysia’s new China-funded railway – [07/02/20]
“Is this what a ‘green’ BRI looks like? Alexandra Radu photographs work on the East Coast Rail Line, which has resumed after a year-long delay.”

Work resumes on Malaysia’s East Coast Rail Link – [25/07/19]
“Malaysia on Thursday (July 25) relaunched its East Coast Rail Link (ECRL), kickstarting work on tunnels and viaducts along part of the route, from Dungun, in Terengganu, to Mentakab, in Pahang after a year-long suspension, and following a deal to slash costs.” 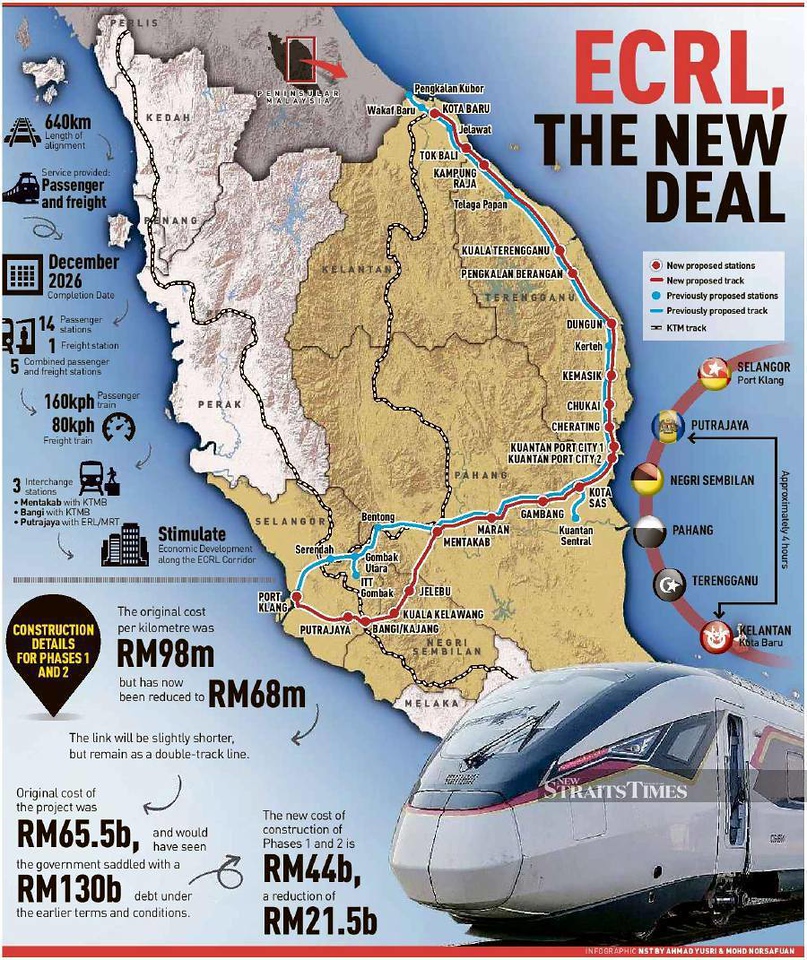 ECRL is now 40km shorter but will still have double tracks – [12/04/19]
“Under the supplementary agreement signed earlier today between Malaysia Rail Link Sdn Bhd (MRL) and China Communications Construction Co Ltd (CCCC), the ECRL will now be 40km shorter for a total of 648km and pass through Jelebu, Negeri Sembilan instead of Gombak in the Klang Valley.” 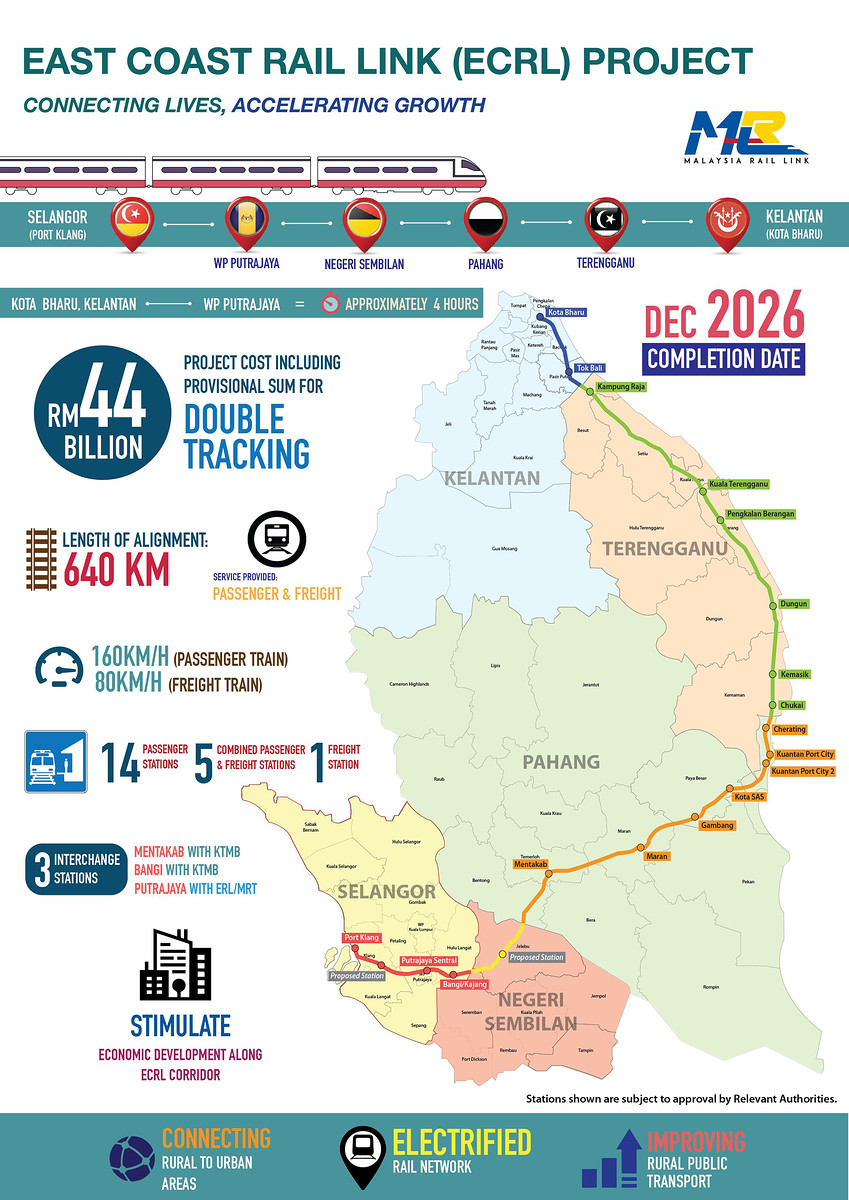 ECRL deal with China to include palm oil buy – [08/04/19]
“The current re-negotiations on the East Coast Rail Link (ECRL) may see its construction price pegged at RM50mil to RM60mil per km as well as a commitment by the Chinese government to buy Malaysian palm oil and bring in projects, according to sources.”

Malaysia and China: breaking up is hard to do – [01/02/19]
“Mahathir’s promise to scrap or renegotiate “unequal” infrastructure deals with Beijing – a plan easier said than done.”

Future of Malaysia’s China-backed East Coast Rail Link hinges on elusive report – [03/01/19]
“Beijing and Kuala Lumpur on Thursday sought to depoliticise the debate over a stalled China-backed megaproject in Malaysia, saying that negotiations on how to move forward would be left to contractors from both sides.”

The final cost of the East Coast Rail Link (ECRL) project is actually RM81 billion and must be reduced significantly to make it viable financially – [06/07/18]
Statement from the Ministry of Finance Malaysia.

China’s belt and road builder finds itself embroiled in a scandal in Malaysian coastal railway link – [12/06/18]
“The project’s estimated total cost of 60 billion ringgit (US$15 billion) was inflated to hide a scheme to channel funds toward paying for debt owed by 1Malaysia Development Berhad (1MDB), the troubled state investment agency, according to a June 4 report by The Edge Malaysia , citing an interview with the newly elected premier Mahathir Mohamad.”

Mahathir says the ECRL project contract is strange – [04/06/20]
“Money from the RM55 billion loan given out by a Chinese bank for Malaysia to build the East Coast Railway Line (ECRL) is being kept abroad, paid to the Chinese construction company in China.”

Malaysia to renegotiate ECRL terms – Dr M – [27/05/20]
“Malaysia is haggling over the terms of a $14 billion rail deal with its Chinese partners and can reduce its ballooning national debts by $50 billion by doing away with mega projects, its prime minister said in an interview published on Saturday.”

Mitigating the environmental impacts of the East Coast Rail Link – [02/03/18]
“The East Coast Rail Line (ECRL), which will connect Port Klang in Selangor with parts of the east coast, will be a boon to commuters by cutting lengthy journeys down to a matter of hours. On the downside, however, the new 688km high-speed rail line will fragment several already fragmented habitats en route by cutting through several major rivers and hundreds of hectares of protected forest in the Central Forest Spine.”

Will the East Coast Rail Link be a game changer for Malaysian international trade? – [01/10/17]

East Coast Rail Link: Malaysia touts rail trade route as rival to Singapore – [10/08/17]
“Malaysia has hailed an upcoming railway linking its east coast to Port Klang on the west coast as an “alternative trade route”, claiming that a projected 53 million tonnes of cargo will bypass Singapore annually by 2030.” 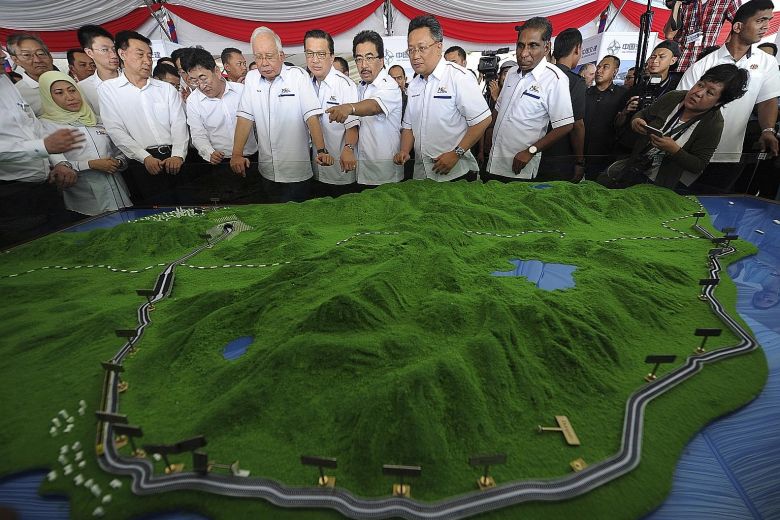 10 reasons why we don’t need RM55b east coast rail link – [08/08/17]
“Why does the country need a double-tracked, electrified East Coast Rail Line (ECRL) from Port Klang on the west coast of Peninsular Malaysia to Kuantan and Tumpat on the east coast – 688 kilometres, to be built at a massive cost of RM55 billion?” 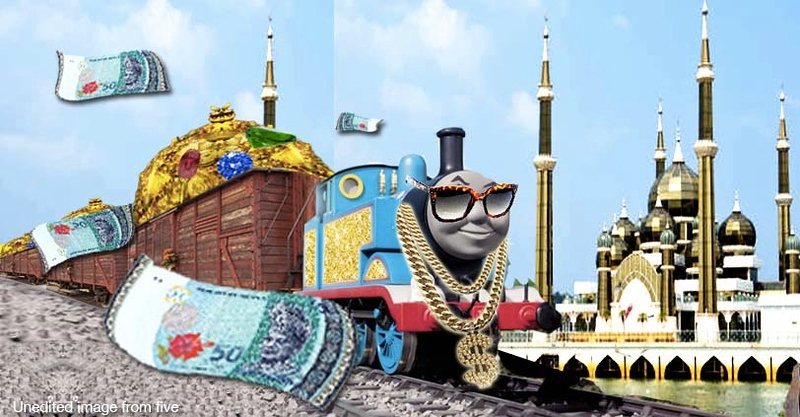