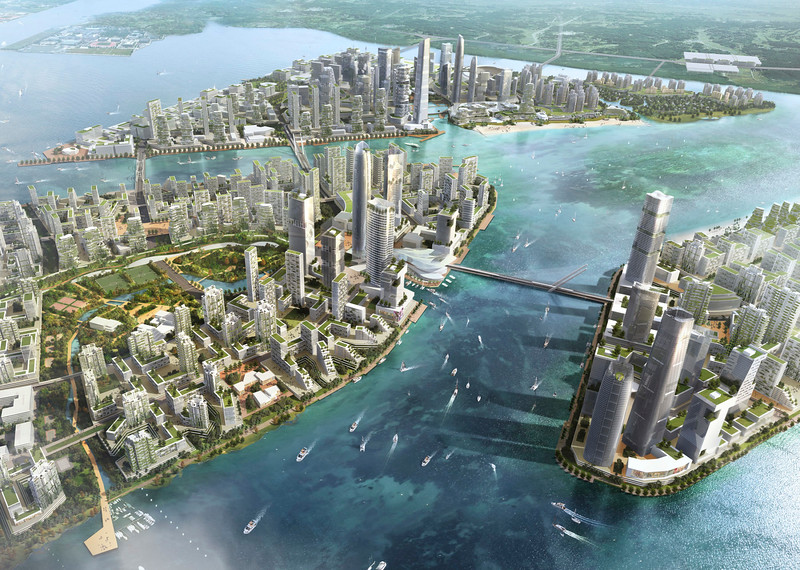 Forest City is a new urban development in the Iskandar Malaysia Special Economic Zone in Johor, Malaysia. The project is made up of four man-made islands covering 30km2, located in the Johor strait opposite Singapore.

The islands will be a mix of residential, leisure, commercial, and industrial space, and will have an estimated population of 700,000 residents.

The project is being developed by Country Garden Pacificview Sdn Bhd as a joint venture between Country Garden Group and the Malaysian-government-backed Esplanade Danga 88 Sdn Bhd (EDSB). Country Garden (headquartered in Guangdong, China) own 60% of the project and it’s a project under the Belt and Road Initiative (BRI). 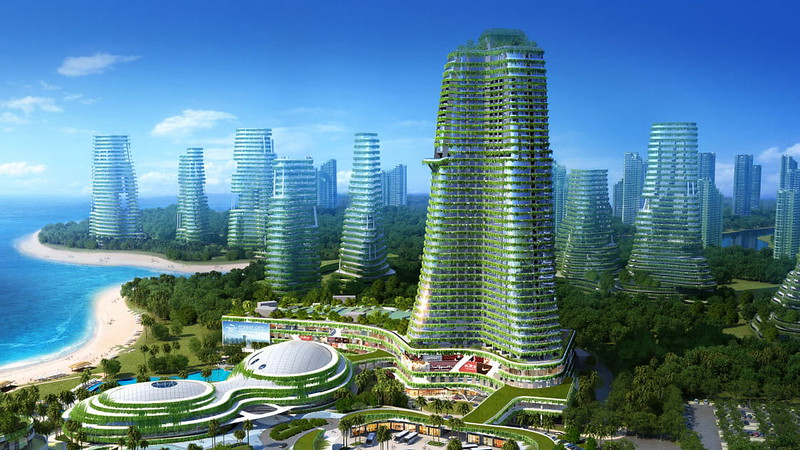 Forest City has been touted as the Shenzhen of Southeast Asia, referring to its proximity to Singapore as Shenzhen is to Hong Kong. The new city is being promoted as a “smart and green futuristic city that combines environment, technology and cutting-edge technology to create an ideal, idyllic and technology-driven living and working space ecosystem.” 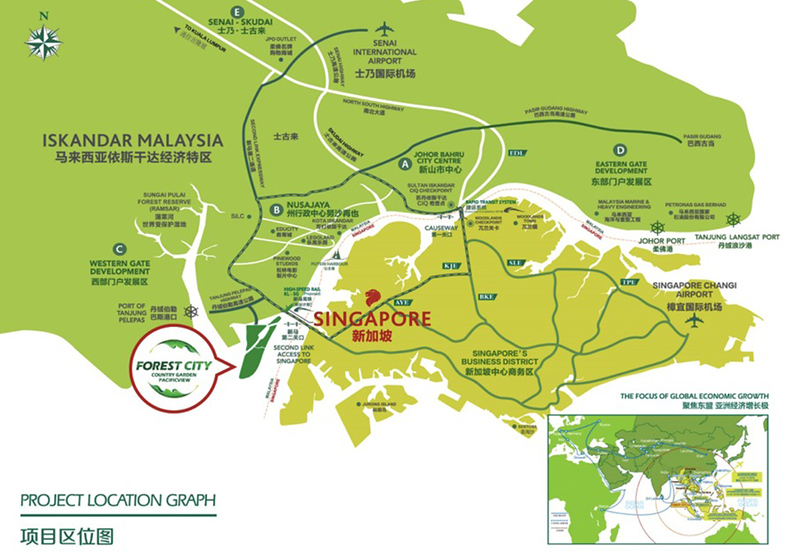 Nothing is official yet, but are plans for public transport which may include a light rail system and water taxis.

Forest City is also close to the proposed Singapore to Kuala Lumpur high-speed rail. It remains to be seen how close and how Forest City will be connected to Iskandar Puteri Station. 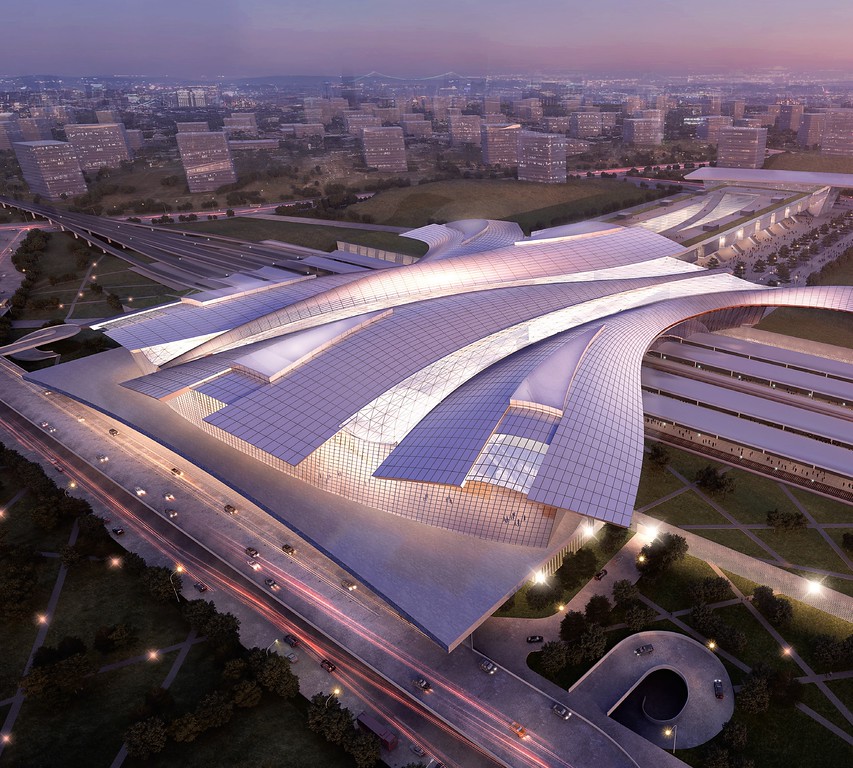 Forest City is near the Malaysia–Singapore Second Link. 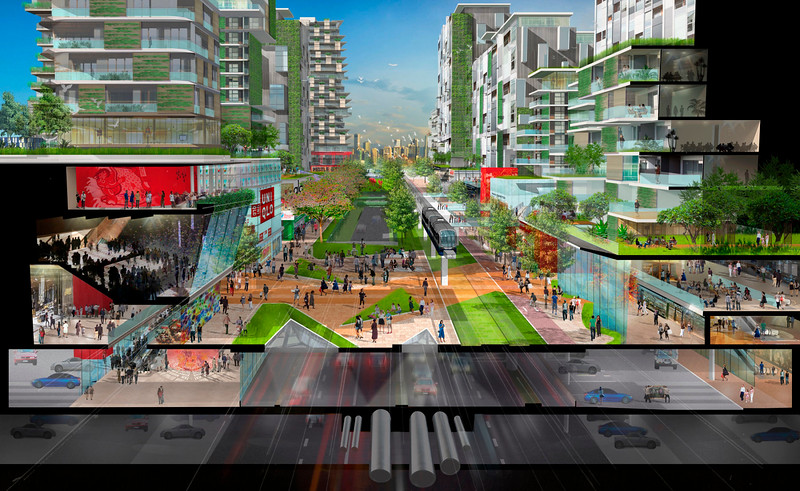 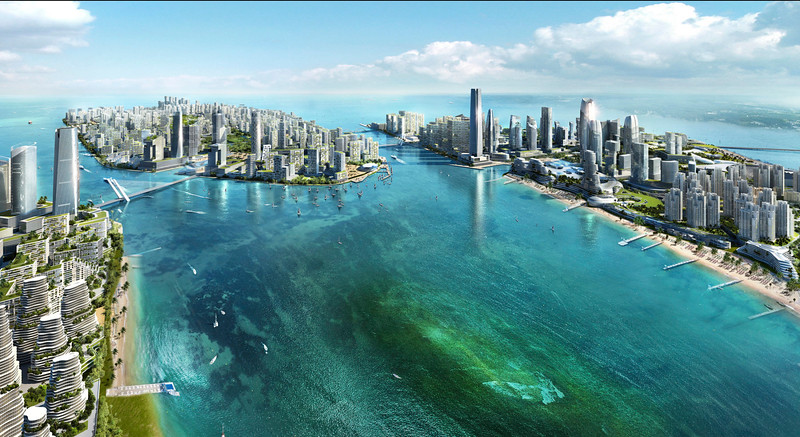 Malaysian ‘forest city’ wins sustainability award – [09/12/19]
“The Asian Townscape Award was given for the ‘Feathers of the Sea’ business complex, which is part of the overall Forest City being developed in Johor.” 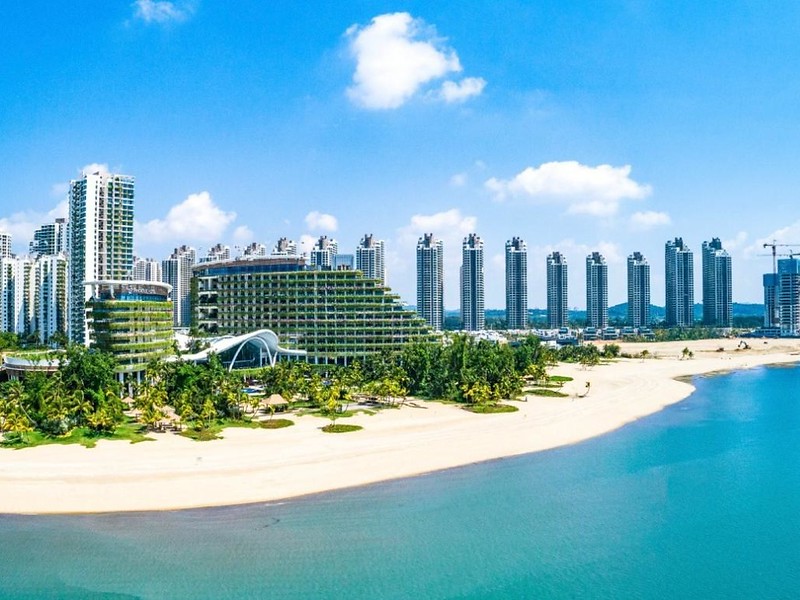 Chinese companies are worse at business than you think – [21/11/19]
“A megaproject in Malaysia shows how quickly deals with private Chinese investors can become massive boondoggles.”

Multi-billion ringgit Forest City project in trouble? – [05/09/18]
“An ambitious US$100 billion (RM414 billion) island city being built off Johor has found itself in troubled waters as the new government takes aim at the development, the latest in a series of China-linked mega projects started under the scandal-plagued ex-prime minister to come under attack.”

Forest City foreign buyers’ ban is likely to be ‘temporary’ – [28/08/19]
“Units already sold won’t be affected as the govt will abide by international laws, says a consultant.”

As opposition wanes, a Malaysian land reclamation project pushes ahead – [02/07/19]

No picnic for Country Garden as shares tumble despite buybacks – [04/10/18]
“Share buybacks are doing little to help stem a US$24 billion selloff in China’s biggest developer by sales.”

Malaysia leaves $100 billion real estate project in limbo – [05/09/18]
“The fate of Country Garden Holdings Co.’s $100 billion project in southern Malaysia remains in limbo as Prime Minister Mahathir Mohamad said foreigners are welcome to invest, but they might not be allowed to stay for long in their new homes.”

Forest City a ‘ticket’ to bring in 700,000 Chinese nationals – [01/09/18]
“The development of Forest City will be reviewed due to its property unit sales terms which do not benefit the country.”

Forest City developer believes Dr M’s statement ‘taken out of context’ – [27/08/18]
“The developer of the Forest City mega project maintains that it has complied with the all laws and regulations with regards to approvals needed to sell their property to foreign buyers.”

Integrated transport system for Forest City – [29/11/17]
“Forest City in Johor will have an integrated public transportation system that can provide seamless travel for residents and visitors, while protecting the environment. It will likely incorporate light rail transit, electric vehicles and water taxis, and have links to the proposed high-speed rail (HSR) network connecting Kuala Lumpur to Singapore.”

Johor assembly hears concerns over Forest City’s water supply – [27/11/17]
“A Johor politician told the state assembly on Monday (Nov 27) that the Johor government had told developer of the Forest City project to source for its own water supply.”

Troubles in Malaysia’s Forest City ‘paradise’ – [06/05/17]
“Flats in the much-touted development are being handed out as freebies to buyers of luxury properties in Shanghai.”

Malaysia’s city of the future is an uncanny valley – [22/03/16]
“Forest City is quartet of islands born from reclaimed land in the Straits of Johor, the thin strip of water between neighbours Malaysia and Singapore, but it may as well be the uncanny valley so much is it like wandering into a video game.”

Johor reclamation works stopped – [24/06/14]
“The Department of Environment has issued a temporary stop-work order against all coastal land reclamation works for the development of the massive Forest City off Tanjung Kupang here pending a detailed study.”