Saigon has been developing at a rapid pace with construction projects dotting the skyline, and more planned in the coming years. While modern buildings are welcome and overdue, some of these projects are being built at the cost of heritage buildings.

This is a problem that has played out before in cities across the world. Many of these cities have realised the err in their ways and now have some form of heritage conservation plan. So far there hasn’t been a coordinated conservation plan in Saigon, and historic buildings are still being knocked down or threatened with demolition.

This page is an archive of buildings and streetscapes that are no more. Some buildings were not considered heritage, but I’ve included those that were landmarks of the city and posted them here as a historical archive.

This is an ongoing list that I am compiling so feel free to make a suggestion or send your own photos. The Saigon Tax Trade Center was a historic shopping centre on the prominent corner of Nguyen Hue and Le Loi. The building was a sentimental favourite for Saigonese, with one of the city traditions being to visit the decorated windows on Christmas Eve. By the time the building was demolished though it had long been modified beyond its original design. The final facade looked nothing like its 1880 design. Inside the building there was an ornate mosaic stairway in the foyer. It was reported that the stairway would be conserved and blended into the new building, which is planned to be a 40-storey tower with a mall and 5-star hotel. Next to the Tax Center was this row of shops on the corner of Pasteur and Le Loi. While they looked a bit run down and obscured by advertising billboards, these would have been restored and preserved in most other cities. The corner block was knocked down in 2016 as part of the Tax Center project. Behind the demolished shops of Pasteur and Le Loi was a furniture yard that featured an unusual brick pigeon coop. Most of this has been demolished, also as part of the Tax Centre project. I always thought this would have made a good art installation, with objects inside each coop. The Quach Thi Trang Square was better known as the Ben Thanh roundabout. This is one piece of old Saigon that I’m not sorry to see the end of. The old photos of it looked quite tranquil, but the square/park was no longer used as a park, and in the end it had become a pedestrian-hostile traffic sewer. I have seen tourists mowed down by motorbikes as they tried to cross the road. Imagine if Piccadilly Circus, Times Square, or Shibuya Crossing were so anti-pedestrian.

The future plan is a for a pedestrianised area on top of the Ben Thanh metro station, so we await to see how pedestrian-friendly it will be and if there is a park to go with it.

One of my favourite old buildings was the art deco office and apartment block on the corner of Dong Khoi and Le Thanh Ton. While going through my photo archives to find a picture for this post, I realised that I had never taken a photo of it. I had always assumed that it would always be there. Why would you knock down such a beautiful building?

The building was knocked down in June 2014, and it was replaced with the city hall extension. I’m now taking photos of all old buildings, just in case. Ba Son Shipyards was established in 1790 as the Chu Su royal naval workshop, and was expanded with the arrival of the French after 1859. A complete history is here. This area would have been the perfect site for a riverside regeneration project. 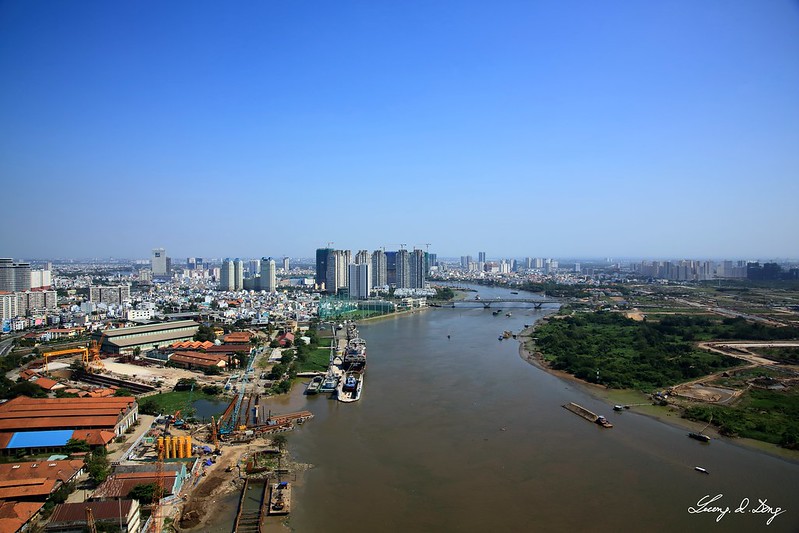 The old warehouses could have been turned into markets and artist spaces, and going by the experience of similar projects around the world it could have been a tourism highlight of the city. Indeed, a waterfront precinct housed in historic warehouses is the sort of thing you see on TV travel shows, putting tourism for the city on the map.

Instead, most of Ba Son has been knocked down for apartment towers and cookie-cutter villas as part of the Vinhomes Golden River project. There are not many public photos available of the warehouses as the shipyards were under navy control. The aerial views give a idea of the size of the area, and what might have been if they were saved. There are a couple of warehouses that are still standing, so there might be hope for them to be conserved. 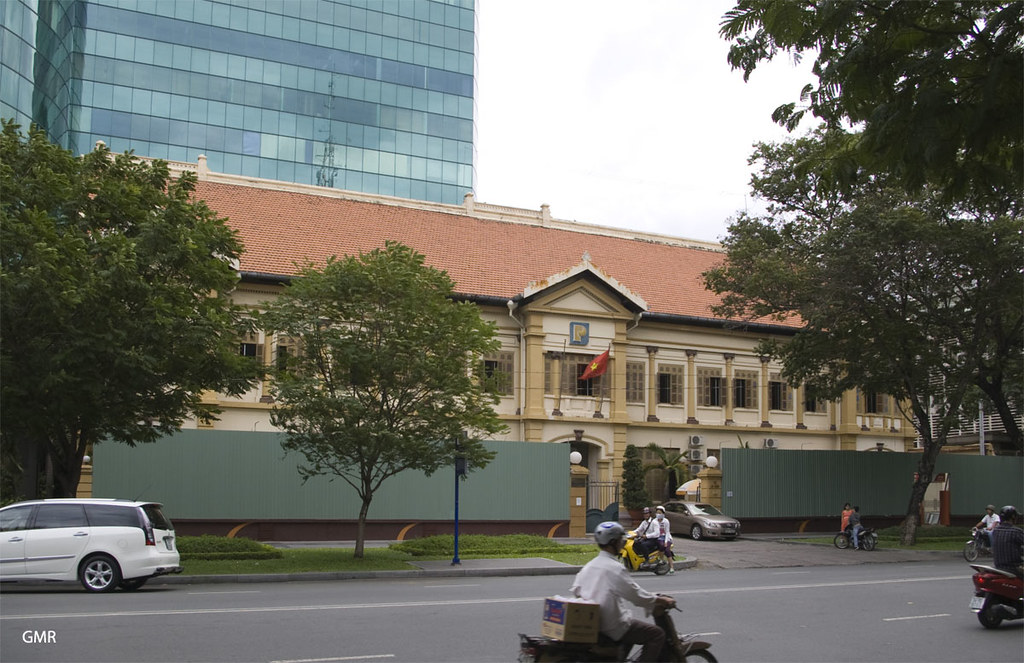 The former Hotel du Controle Financier might be the best example of the disregard of heritage buildings in the city. The building was demolished in 2010 after being erroneously classified as “faux-colonial”. A luxury apartment tower was to be built in its place, though it still sits as a car park. The plot has been mired in controversy, with the discovery that the land was sold well below the market value. 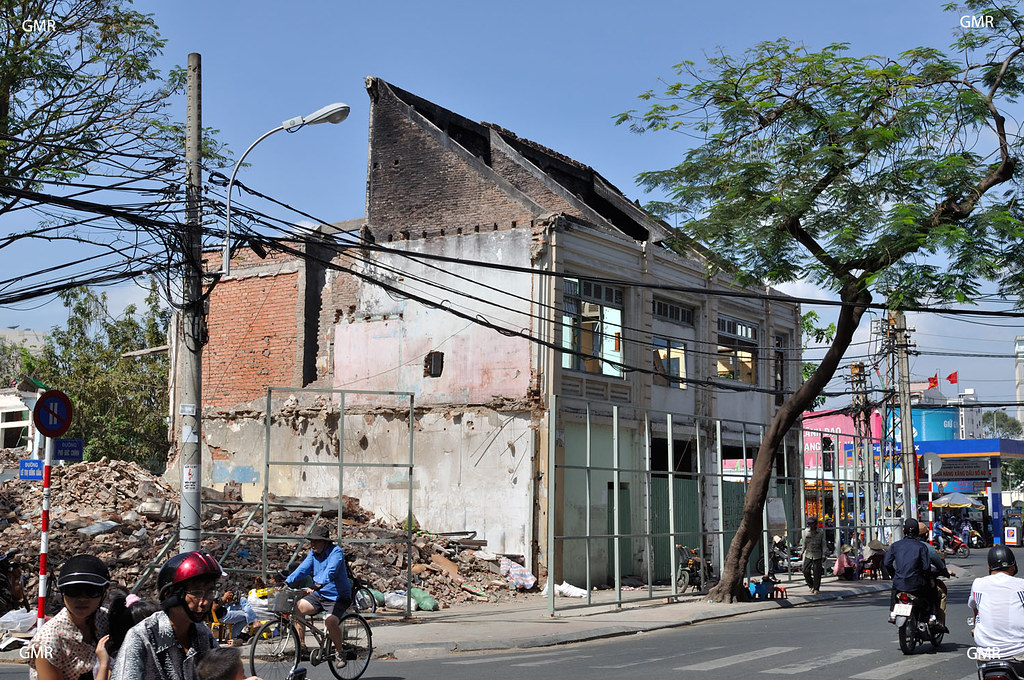 Opposite Ben Thanh Market, on the other side of the roundabout was a row of shophouses. These were demolished to make way for a two-tower project that has yet to be built. 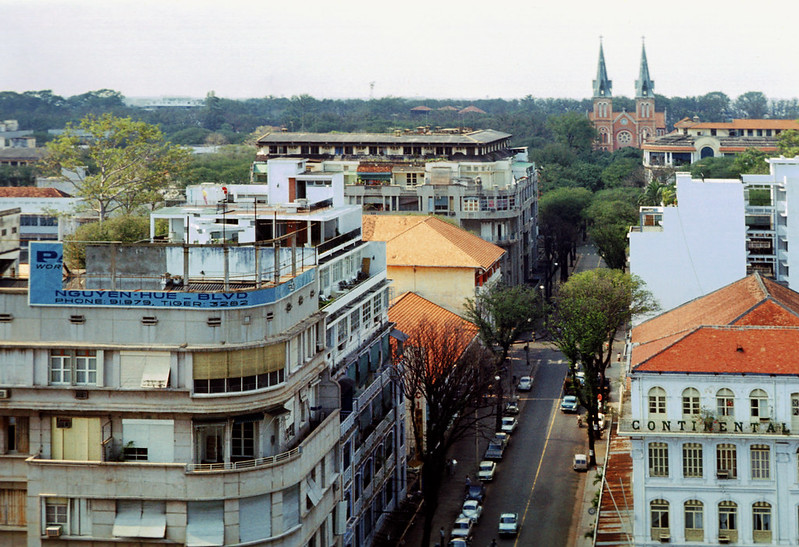 The Eden Centre (or Eden Mall) was opposite the Continental Hotel and was one of the iconic buildings of Dong Khoi Street. It was famous for being the home of Givral Cafe, which was a popular meeting place during the war.

The building was demolished in 2010 and has been replaced by the Union Square building, which is a rather bland version of the original. It currently houses luxury shops, and it will eventually be home to a metro entrance for the Opera House station, along with the Mandarin Oriental. This apartment block was on the triangular block at the corner of Nguyen Thai Binh and Le Cong Kieu. It had a tree growing out of the roof and was covered in roots and vines. I always thought this block would have made a great luxury apartment block, but luxury apartments in restored heritage buildings hasn’t become a thing here yet. It has since been knocked down to make way for a modern apartment block. The biggest streetscape change I’ve witnessed has been the cutting down of the big trees on Ton Duc Thang for the D1-D2 bridge. There were four rows of trees with three lanes that don’t align with the future bridge. As there is hardly any riverbank on the Saigon River, the bridge needs a high clearance at street level and the bridge ramp will extend far into Ton Duc Thang. The new bridge is needed, so it was a tough call to cut the trees down.