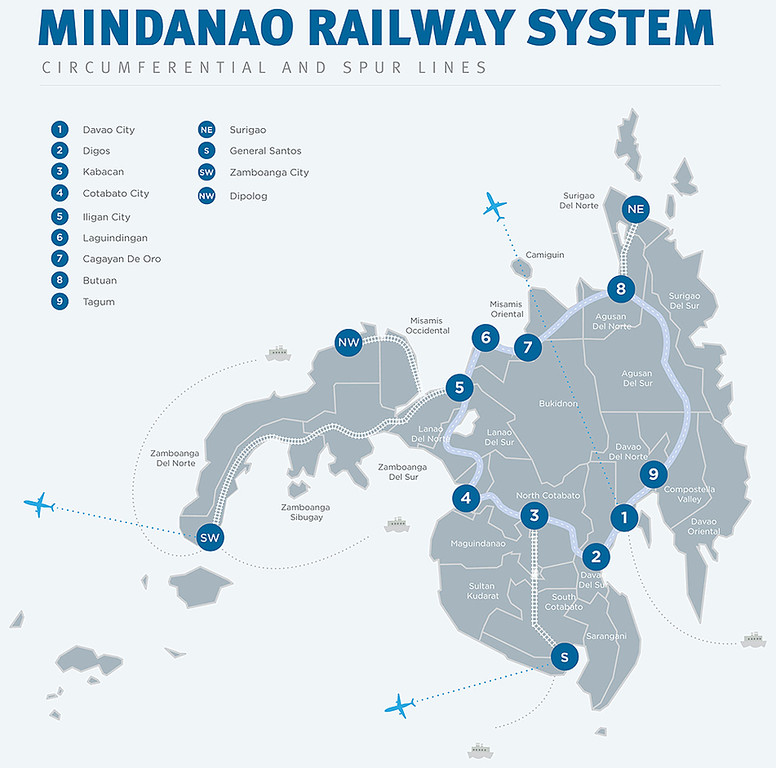 The Mindanao Railway Project is a proposed railway network on the island of Mindanao in the Southern Philippines. The railway would connect the major cities of the island via a circumferential railway, with spur lines connecting outlying cities.

Mindanao is the second-largest island in the Philippines, and it has a population of over 20 million people. Luzon is currently the only island that has an operating railway, most of which are railways serving Metro Manila.

Plans for a island-wide railway were go back to the 1930’s, and the railway was reconsidered in the 1990’s. In 2016 Rodrigo Duterte was elected as president of the Philippines, becoming the first Philippine leader from Mindanao. One of his election promises was to begin the project and have a line operating before the end of his term in 2022.

Not long after Duterte came to power it was announced that construction of the 2000km system would begin in 2017. There has since been an announcement every year saying that the project will start next year.

The project will be built in stages, with the first section being a 105km line from Tagum to Davao (the city where Duterte was previously the mayor) and then Digos. The first segment will take 1.3 hours to travel from Tagum to Digos, down from the current 3.5 hours by road.

This section will eventually form part of the 830km circular loop around the island. Other media sources quote the total system as being from 1500km to 2000km. There are other maps that show a north-south line from Cagayan de Oro to Davao, which may account for the variations in distance.

The railway was originally going to be a dual-track electricity-powered railway, but it has since been downgraded to a single-track diesel-powered railway. The line will be built to accommodate another track and electrification in the future.

Another issue has been the matter of funding. After interest from the other East Asia powerhouses, China has become the main lender for the project. A condition of this loan is that only Chinese contractors will be selected to bid for the project.

First phase of Mindanao Railway Project to cut Tagum to Digos travel time from 3.5 to 1.3 hours – Press release from the Department of Transportation (DOTr).

The following links are the news archives of the Mindanao Railway Project.

Piñol: Railway design ‘not what Mindanawans asked for’ – [12/02/21]
“The single-track design for the first phase of the Mindanao Railway Project (MRP) is “not what the Mindanawans were asking for,” Mindanao Development Authority (Minda) Chairman Emmanuel Piñol said in a recent forum.”

House panel pushes for 2 tracks, electrification of Mindanao railway – [11/11/20]
“The House committee on Mindanao affairs wants the Mindanao railway to eventually be a two-track, electric-powered line instead of a single-track railway with diesel engines.”

Mindanao rail phase 1 construction moved to 2021 – [10/08/20]
“The start of the construction of the China-funded Mindanao railway phase 1 has been moved to the first quarter of 2021, with the government yet to decide on a contractor.”

Mindanao railway bidder shortlist expected this month – [08/06/20]
“The government is expecting to receive the shortlist of bidders for the first phase of the China-funded Mindanao railway from the Chinese Embassy within the month, a transport official said.” 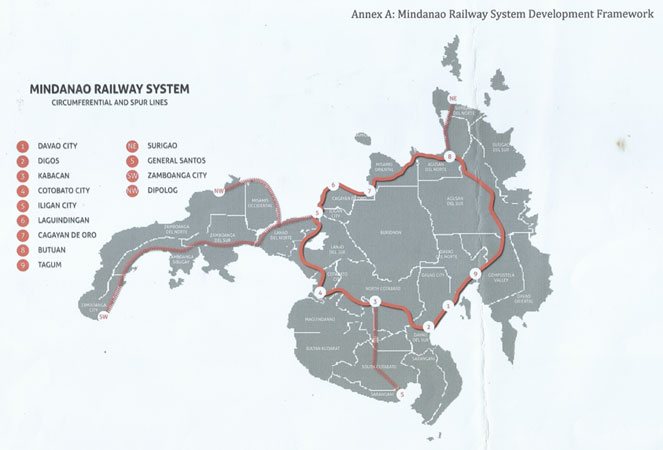 RDC-Davao questions single-track railway – [09/03/20]
“The Regional Development Council in Davao Region (RDC-Davao) wants the Department of Transportation (DOTR) to explain their decision in choosing the single-track design for the first phase of the Mindanao Railway project.”

Mindanao rail track configuration still contentious – [15/01/20]
“The start of construction for the Mindanao Railway Project, which has been pushed back more than once due to right-of-way (RoW) issues within Davao City, is facing another stumbling block amid questions over the single-track diesel-powered system approved by the national government.”

DOTr seeks to start massive Mindanao railway plan in early ’20 – [07/12/19]
“The Department of Transportation (DOTr) wants to break ground on the first phase of the massive Mindanao Railway Project—among the big-ticket infrastructure deals to be financed mainly by the Chinese government—by early 2020.”

No money yet from ‘friend’ China for costlier part of Mindanao railway – [15/07/19]
“The more expensive initial phase of the massive Mindanao Railway Project running through the Davao Region would be funded by the Philippines as no agreement has been reached yet with China for funding despite the Duterte administration’s tight embrace of the Asian behemoth as a friend.”

Mindanao railway update: LGUs sign MOA with DOTr for land acquisition – [26/01/19]
“Five local government units in Davao Region signed a memorandum of agreement with the Department of Transportation (DOTr) for the transfer of funds for the road right of way (RROW) and site acquisition for the first phase of the 1,550-kilometer Mindanao Railway Project.”

Chinese funding for Mindanao Railway Project ‘a done deal’ -[04/12/18]
“The construction of phase 1 of the Department of Transportation’s Mindanao Railway Project with funds from Chinese Official Development Assistance “is a done deal,” project manager Patmei Ruivivar said. Ruivivar told on Friday that this was confirmed to her by Transportation Undersecretary for railways Timothy John Batan.”

DoTr, LGUs collaborate to fast-track Mindanao’s 1st train project – [31/08/18]
“The strong collaboration between the Department of Transportation (DoTr) and the Local Government Units (LGU) in Davao region, particularly in the land acquisition phase, is seen to fast-track the multi-billion Mindanao Railway Project (MRP).”

Double-track electric system eyed for Mindanao railway – [21/06/18]
“The proposed two-track electric train system for the main line of the Mindanao Railway System (MRS) has been approved by the Department of Transportation (DoTr), a Davao-based business leader said.”

Duterte: My first major project is a railway – [30/05/16]
“President-elect Rodrigo Duterte will prioritize the construction of a railway, he told media during a press conference on Saturday night, May 28.”