The Thai Bridge (Saphan Thai) is a proposed bridge spanning the Bay of Bangkok, connecting Chonburi Province in Eastern Thailand to Phetchaburi Province on the Gulf Coast. While the exact location isn’t stated, it is roughly from Pattaya to Hua Hin. The project has been quoted at 900 billion baht (29 billion USD).

The bridge length has been estimated from between 80 to 100 km, depending on its design and location. Some reports have stated it being a tunnel, while others have mentioned a bridge and tunnel combination (similar to the Hong Kong-Zhuhai-Macao Bridge). The bridge is also referred to as the East-South ‘Thai Bridge’ project, as its purpose is to connect ports in the south of Thailand with Laem Chabang Port in Chonburi. Part of the proposal for the Thai Bridge includes building a new railway from Chumphon to Ranang. The port at Ranong would then become a major gateway to the Andaman sea, and providing an alternative to the Dawei Port Project in Myanmar.

The route from Ranong to Chumphon has also been referred to as the Land Bridge project, though this is not a good description if it includes a major sea crossing. It also confuses itself with a proposed “land bridge” alternative to the Thai Canal.

If the Thai Bridge was built it would be longest sea crossing in the world, surpassing the 55-kilometre bridge–tunnel system of the Hong Kong–Zhuhai–Macau Bridge.

This map is for visual purposes as the exact location isn’t specified. The map includes places mentioned in this article.

Thai government planning to invest 900 billion baht on ‘Thai Bridge’ mega project to connect Pattaya area with Hua Hin – [11/10/20]
“…the ‘Thai Bridge’ project hopes to connect national transportation from Eastern Thailand to other regions in lower western and upper southern Thailand as well as to potentially open up new transport routes between East Asia and ASEAN countries in the region such as Malaysia. The specific location of the bridge would likely be in the Pattaya/Chonburi area and connect to the Hua Hin area.” 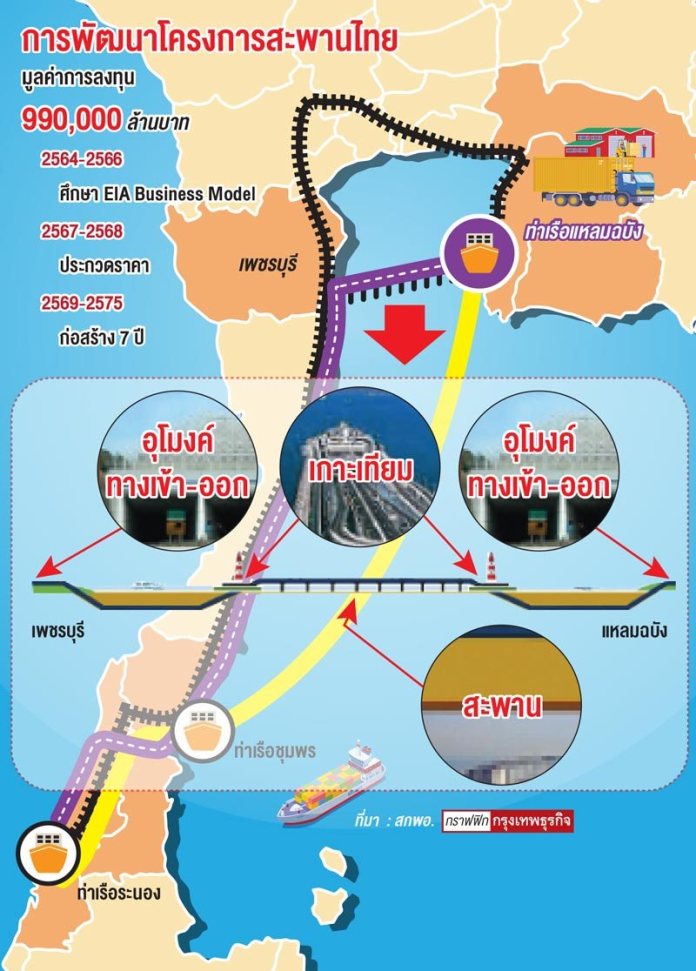 EECO board green lights study on projects linking Thai ports with other Asian land and sea routes – [07/10/20]
“A Thai bridge project, which aims to link the Eastern Economic Corridor to the Southern Economic Corridor by constructing a four-lane highway connecting Thailand’s west and east coasts (Chon Buri and Petchaburi). This will save travel time by 2-3 hours and can also promote tourism and reduce freight costs between the South and Laem Chabang Port.”

EEC panel okays feasibility studies on three new projects – [06/10/20]
“The three new projects are a trio of dry ports worth a combined 24 billion baht in Khon Kaen, Nakhon Ratchasima and Chachoengsao; a deep-sea port, motorway and double-track rail development network linking the Gulf of Thailand and Andaman Sea worth 168 billion; and the Thai Bridge Project (Saphan Thai) worth 990 billion.”

East-South ‘Thai Bridge’ project gains momentum – [05/10/20]
“The 900-billion-baht Thai Bridge project, aimed at building a new freight route from the East to the South, is expected to be discussed by the Eastern Economic Corridor (EEC) Policy Committee today.”

The 50 kilometer bridge over the Gulf of Thailand
The idea of a bridge across the Gulf of Thailand was proposed between 2002 and 2005. It was also known as the Laem Phak Bai project, named after the coastal area in Phetchaburi Province. 2bangkok.com has managed to archive news from this time, which hasn’t been archived by the Thai media.